New features review of iOS 12, 'Me letters' that can create original anime letters, 'Screen time' that can monitor activities, etc. are newly released 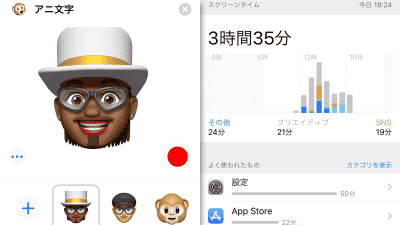 Delivery of the latest version " iOS 12 " of Apple's OS for iPhone / iPad began. While there is no major change in appearance in this update, it includes enhancement of AR function, improvement of UI, enhancement of Siri function, and so on.

◆ Grouping of notification screens Topics of message reception and notification from an application are grouped by application and displayed in a state where they overlap each other vertically. In addition to improved ease of viewing, convenience is also improved, such as group deletion at once. 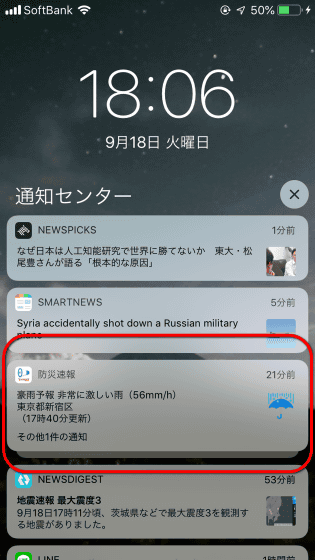 By tapping notifications you can expand the group in this way and check individual displays. You can also delete all at once by tapping "x" at the top right. 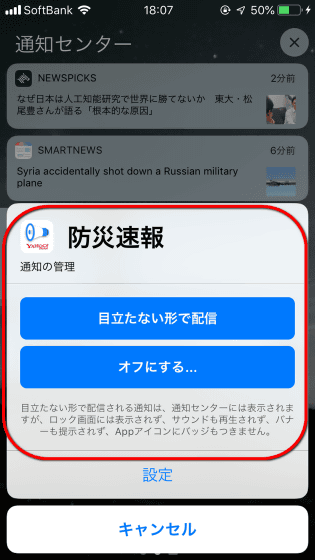 ♦ A bar chart showing the battery usage status appears on the "Battery status" screen. A graph showing the remaining capacity and usage status of the battery is now displayed under "Battery" on the setting screen. Since the screen below is still in use for about half a day, the graph is shortened in the horizontal direction, but if you use it every day, you will be able to check the remaining capacity of the battery at a glance.

In this graph, you can check which application was consuming the battery in that time range by tapping the graph and selecting the time zone.

Similarly, you can switch to the activity time of each application by tapping "Show activeity".

◆ Screen time <br> Understand how much time is spent on the app on the time axis of the day and the past 7 days and also how much time you spend on the app and website on your own A new tool to support you to choose is " screen time ". On the screen, the bar graph shows the time when the application was used as shown below.

After checking the usage status, it is also possible to limit the time to use the terminal. Set " Hibernate time " to set the time zone when you do not watch the screen, "Limit App usage time " to set the upper limit of the time to use the application, Conversely avoid the restriction and always decide on the application to use always " Always allow "And the" content and privacy restriction "item which blocks inappropriate content has appeared. You can also strictly manage this limit by setting "screen time / passcode", or allow extension of time limit.

In addition, it is possible to "share among devices" which sums the time seen on the screen of all the devices signed in to iCloud, and "family members can use the screen time on the devices used by the family" There is item such as setting screen time ". The time limit will be reset at 0 o'clock every day.

◆ Add "Oyasumi Mode" option <br> An option is added to "Goodnight Mode" where incoming calls and notifications are turned off, "1 hour after", "until tomorrow morning", "until departing from this place" An option that can be set on the calendar so that the good night mode is automatically turned off when the meeting such as a meeting is over has been added.

Also, if you set "Bedtime" to on, you can darken the display until you unlock the iPhone the next morning and turn off the notification sounds that arrive at night.

◆ using the AR function that can be stereoscopically recognize the "measurement" app appeared <br> space for measuring an object using the ARKit, the size and area of the object captured by the camera can be measured, "Measurement" app Has appeared. It is limited to iPhone X and later models, but in the initial state of iOS 12 it is in the "useful tools" folder.

The measurement tool can measure almost accurate dimensions instantaneously by specifying two points of the object. In addition, if it is a rectangular object, you can automatically recognize the four corners and automatically detect the size. It is likely to be better to measure with a measure with a chitin if precision enough to accurately measure dimensions in millimeters is required, but when you want to measure the size of the room when buying furniture, did. ◆ "Ani character" is upgraded - "Ani character" which another character moves following the movement of the face has been strengthened, and four of "Koala", "Tyrannosaurus", "Ghost" and "Tiger" are newly added It was. Also, it corresponds to the action of putting out wink and tongue. You can check how each moves in the following movie.


Also, "Me letters" that can make original anime letters matched to their personality and atmosphere appeared. By combining all kinds of facial parts such as skin color, hair style, face shape, beard, eyeglasses, it is now possible to make a perfect Me letter for myself. With these animated characters, it became possible to shoot movies of up to 30 seconds.