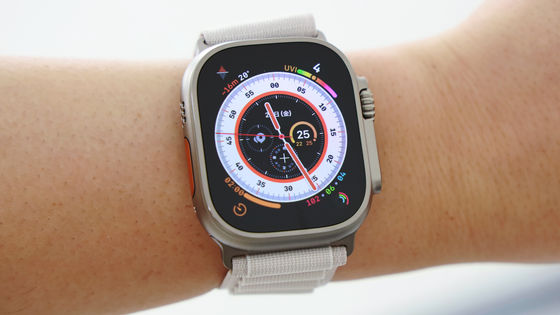 The Apple Watch Ultra , the first high-end model of Apple Watch, will finally be released on Friday, September 23, 2022. The GIGAZINE editorial department also ordered at the same time as the reservation started, and I was able to get the Apple Watch Ultra on the release date safely, so I took a video & photo of its evolved appearance and carefully observed it.

Apple Watch Ultra is delivered in a cardboard box like this. 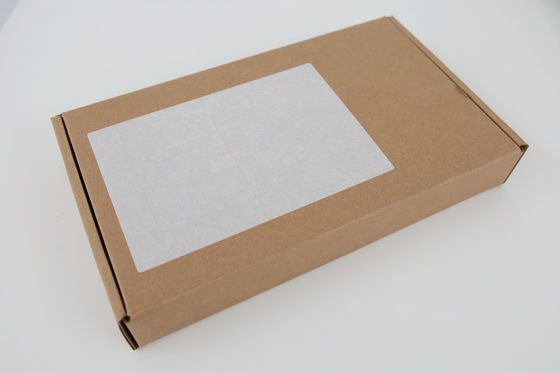 The package looks like this. Like other Apple products, the outer box is pure white. The center has an embossed Apple Watch logo. 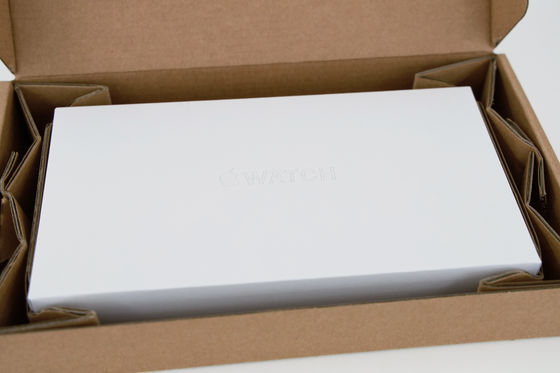 This outer box can be opened from the back side. 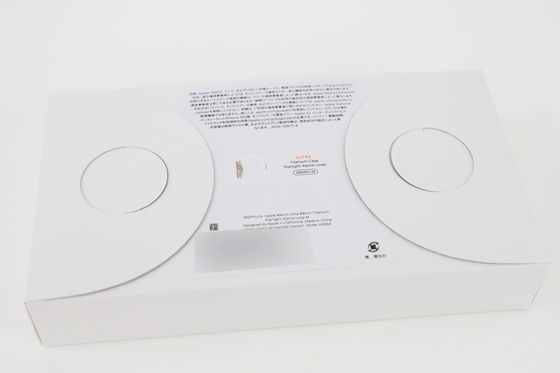 When I opened it, the snowy mountains were printed like this ... Contains a getting started guide. 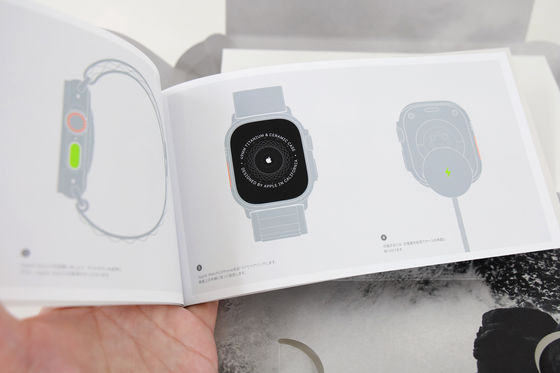 Below that, boxes containing Apple Watch Ultra and special bands are stacked separately. 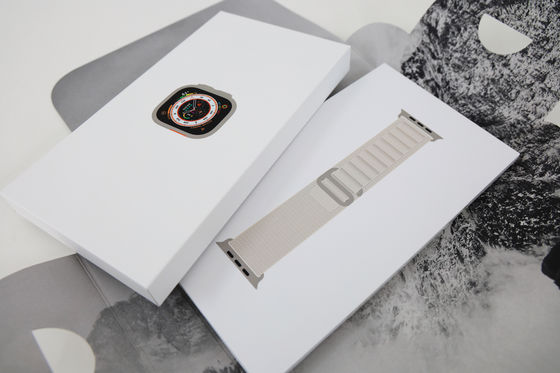 First, open the Apple Watch Ultra. There is a sticker with an arrow mark on the bottom of the box, so pull it in the direction of the arrow. 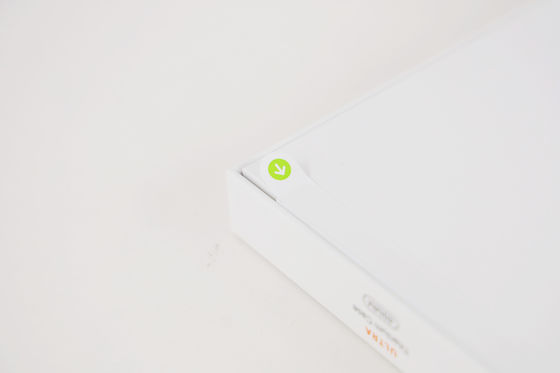 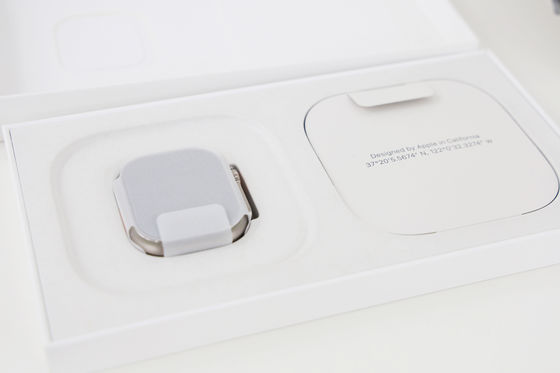 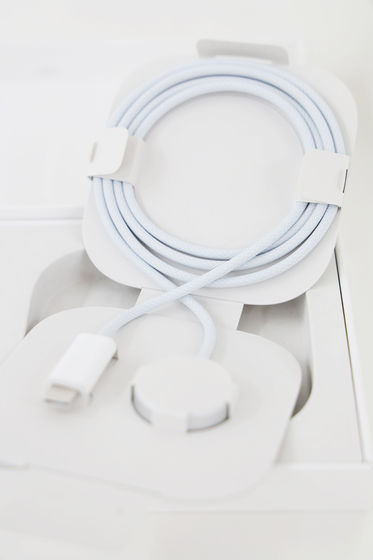 This is the body. The case size is 49mm, making it the largest case ever. The case is also made of unprecedented aerospace industry-level titanium, and has excellent weight, durability, and corrosion resistance. The body color of Apple Watch Ultra is only natural. 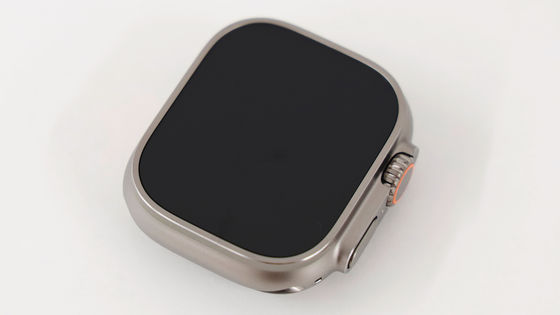 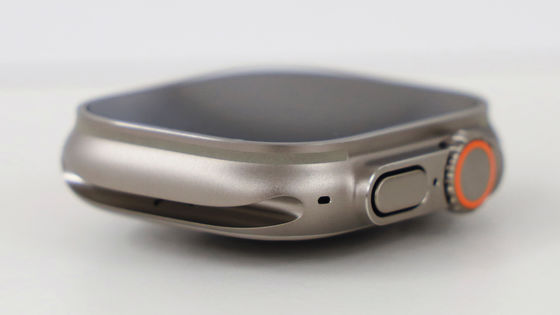 The difference is obvious when you actually compare it with the conventionally designed Apple Watch. The roughness around the Digital Crown on the right side is also a feature of the Apple Watch Ultra. 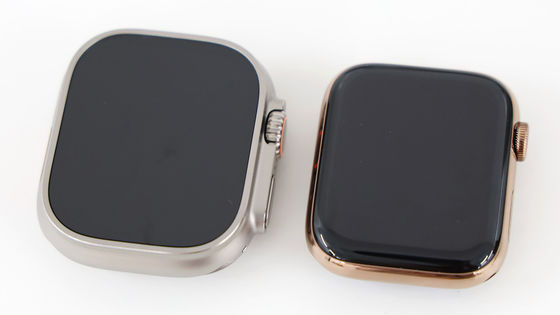 Looking from the side, it looks like this, and it is a big difference whether there is an edge of the display part. Another point is that the Apple Watch Ultra's titanium case does not have a mirror finish, so dirt such as fingerprints is less noticeable. 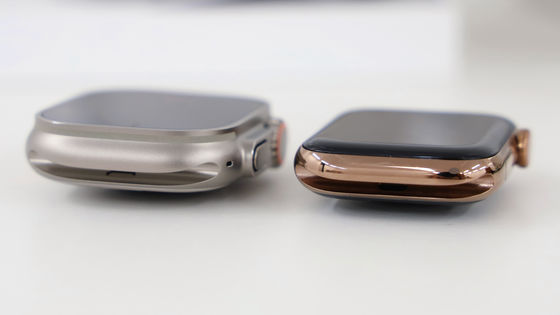 The model name and case size are written on the back. 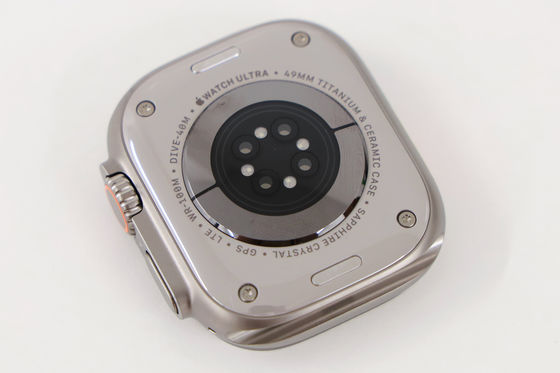 There is only a groove for passing the band on the top surface. 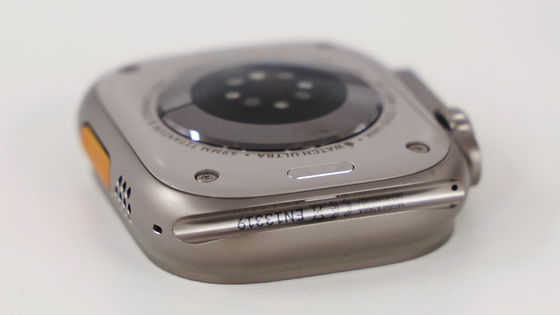 The same goes for the bottom. 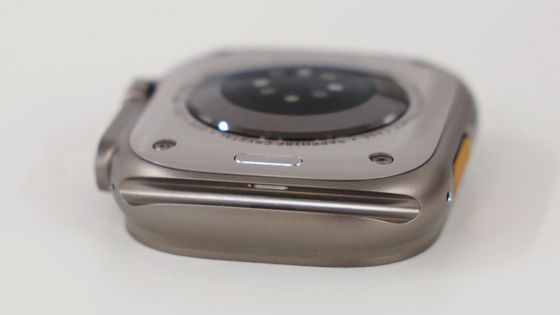 A new 'action button' has been added to the left side of the Apple Watch, where there was only a microphone and a speaker. The multiple holes to the left of the action button are advanced dual speakers, and the single hole to the right is a siren that emits an 86 decibel sound pattern that can be heard up to 180 meters away. The action button is a button that the user can freely assign to launch an application, etc., and the color is a distinctive international orange. 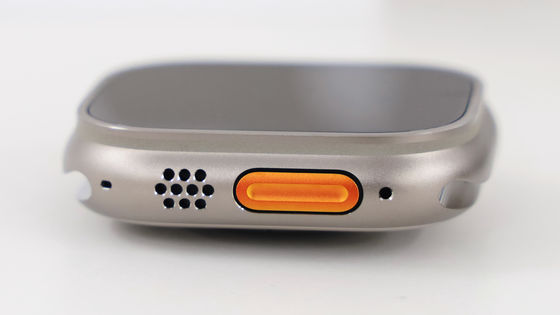 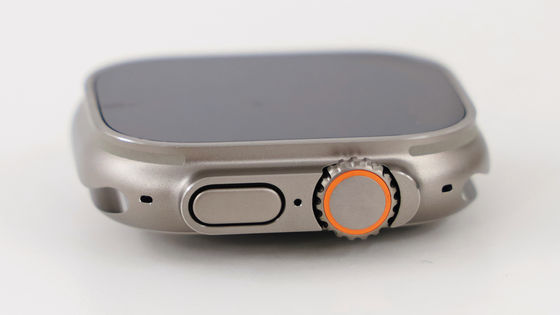 The actual weight of the main unit is 61g. 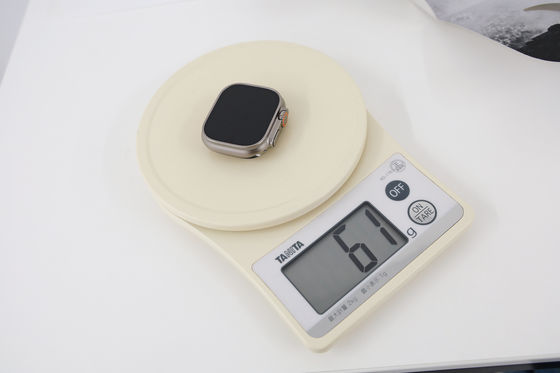 Next, we will open the alpine loop, which is one of the exclusive loops. 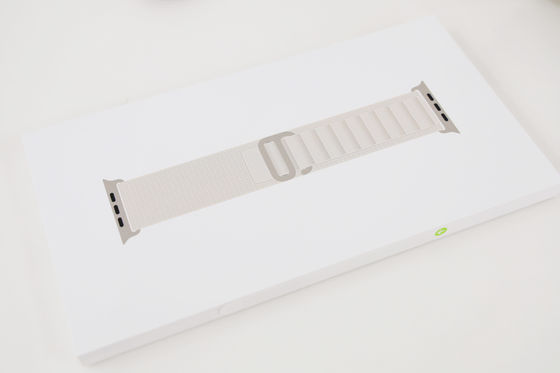 I chose Starlight as the color. 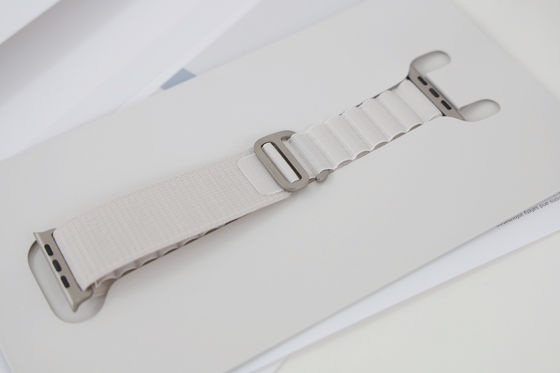 Alpine loop is a loop that inserts a titanium G-shaped hook into the loop and fixes it. 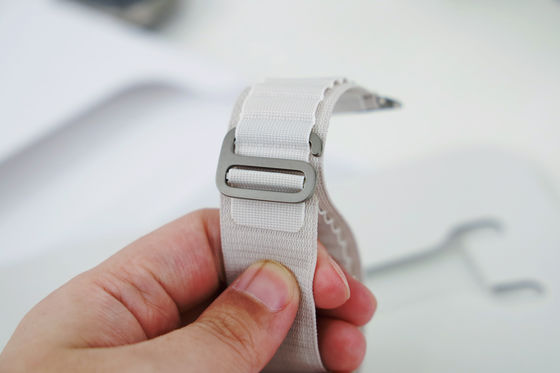 So, if you insert the fastener part at the end of the band into the groove on the top and bottom of the Apple Watch Ultra ...... 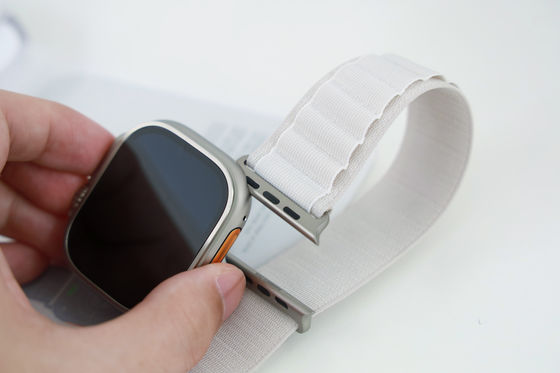 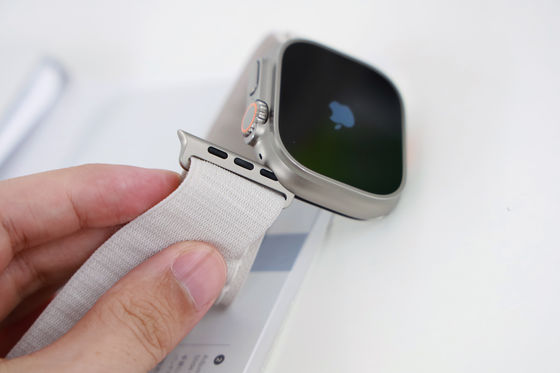 Band installation is complete. Try turning on the power as it is. The display resolution of Apple Watch Ultra is 410 x 502 pixels. The display is an always-on Retina display with a brightness of up to 2000 nits, the brightest ever, which means it's twice as bright as other Apple Watches. 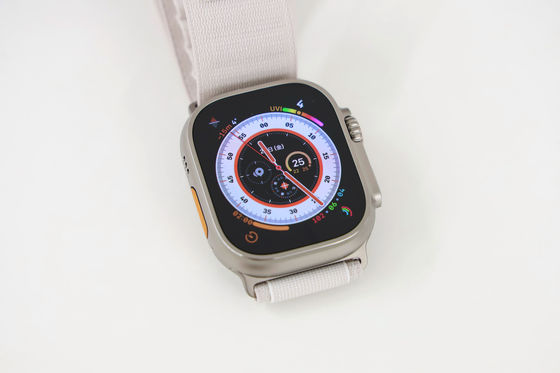 When you actually wrap it around your arm, it looks like this. After all, the size is quite large compared to the previous Apple Watch, and it seems that there are many people who say that even adult men will be larger than their wrists, including the band fastener part of Apple Watch Ultra. However, at first glance, I didn't find the size and weight of the watch to be troublesome. 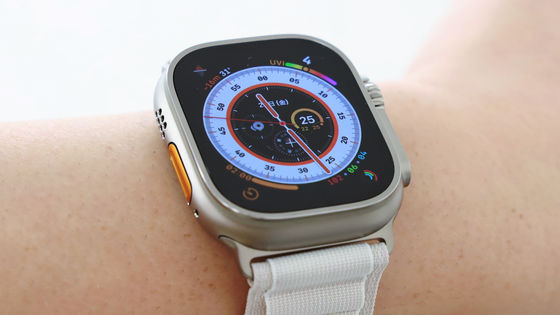 It features a wayfinder dial designed specifically for the Apple Watch Ultra, a time dial that can be switched to a live compass, and space to display eight complications. Also, by turning the Digital Crown, it is possible to activate the 'night mode' that changes the color of the entire dial to a color that is easy to see even in the dark. You can check how to actually turn the Digital Crown of Apple Watch Ultra to activate or deactivate the night mode of the wayfinder dial in the following movie.


Since the display of Apple Watch Ultra is a constant display Retina display, the wayfinder dial will change to a black tone after a while to reduce battery consumption. 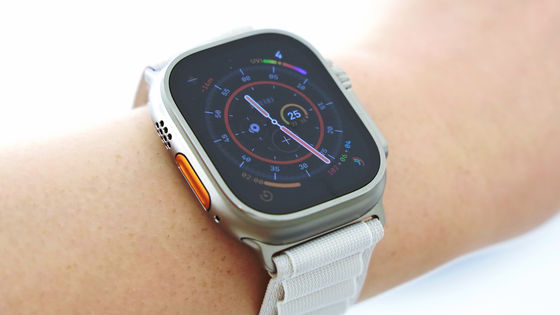 The main body of Apple Watch Ultra is only a 49 mm case made of titanium, and three types of bands are available: Alpine Loop, Trail Loop, and Ocean Band. No matter which band you choose, the selling price is 124,800 yen including tax.